British actor Nicholas Hoult, known for his roles in blockbuster films including Mad Max and the X-Men series, has become the second Jaguar ambassador to tackle the ‘Smart Cone challenge’ after F1 driver Romain Grosjean set the score to beat earlier this year.

It comes as Nicholas’ brand new film Collide, which also features Felicity Jones, Anthony Hopkins and Ben Kingsley, hits cinemas across Europe. The film features Nicholas behind the wheel of a Jaguar XF, as well as the Jaguar F-TYPE as the ride of choice for Ben Kingsley’s character.

For the unique ‘Smart Cone’ challenge, Nicholas put the Jaguar XF AWD R-Sport through its paces around a course situated in the beautiful backdrop of rural Sardinia, where the Art of Performance Tour visited in August. The course was built on a low-grip sandy surface, pushing both Nicholas and the AWD capability of the XF to the limit.

The Smart Cone course uses wireless technology to randomly illuminate pairs of cones to set out a different route each time. With millions of different potential options taking place in real time, the technology provides a unique test of driving skill, precision and reactions.

The challenge is part of the Art of Performance Tour – a worldwide tour for Jaguar fans that provides the opportunity to drive the latest Jaguar products. To get behind the wheel and challenge Nicholas’ score of 42000 and Romain’s score of 49032 points, sign up here: Jaguar Experience

"I’ve loved getting behind the wheel of the new Jaguar XF AWD R-Sport. Driving scenes in films can be a challenge – everyone expects you to be a superstar even behind the wheel and I’m definitely not a pro driver – so it’s good to be able to put my skills to the test in a safe environment. The XF AWD R-Sport is great – it does a lot of the work for you. I was driving on a particularly challenging surface with lots of sand and dust but the car just gripped and performed. It was really fun to be able to compare driving the car here to some of my driving experiences when filming and hopefully I’ve done myself justice!”

The new all-wheel drive option is available for the 2.0D 180 AWD R-Sport variant of the model. It brings Jaguar’s Intelligent Driving Dynamics system, shared by the F-TYPE AWD, to the executive saloon. With the ability to transfer torque to the front axle when it senses a loss of traction, the system provides surefooted capability across all surfaces. 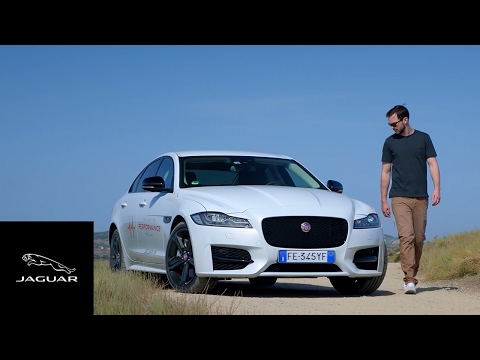