Microsoft's Turn 10 Studios - the creators of Microsoft's iconic Forza Motorsport racing game - have chosen the striking new Lamborghini Huracan LP 610-4, in Midas yellow, as the hero car for the latest in the franchise – Forza Horizon 2.

The game is set to the stunning back drop of Southern Europe, providing the player with all of the thrills that are presented by the new supercar's instinctive technology. The Huracan forms the very latest chapter in the racing games timeline; a chapter that revolves completely around the Gallardo descendant.

Using next generation graphics, Forza Horizon 2 immerses the player in beautiful Mediterranean landscapes with weather, Drivatars (Xbox One's cloud-based racers that replicate the behaviours of friends and strangers to drive like real people) and endless routes. It's not only beautiful scenery that the developers have focused on however; the attention to detail is second-to-none with cars featuring everything from full 3D interiors and working power windows to working headlights and full customization.

The announcement came at this year's Electronic Entertainment Expo in Los Angeles, where Microsoft also announced that the game would be coming exclusively to Xbox One and Xbox 360 in fall. Forza Horizon 2 will be the first game to feature the incredible new Huracan LP610-4 as a drivable vehicle and as such will be the first place that gamers worldwide will get to experience the insatiable V10 first hand.

The Lamborghini Huracan LP610-4 is the successor to the hugely successful Lamborghini Gallardo, which was retired late 2013. The new car features a 610bhp V10 engine that is fed to all four wheels through a sophisticated electronic system. On both the interior and the exterior, the Huracan symbolises everything that a Lamborghini should be – striking. 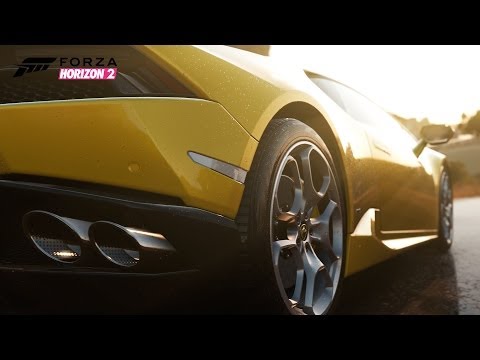