It’s official, the FIA (the motorsport’s governing body) have approved plans for the World Rallycross Championship to go all-electric from 2020. Prepare yourself for all-electric supercars with the equivalent of over 600hp.

Plans to introduce electrification to the World Rallycross Championship have actually been discussed at length over the last couple of years; Volkswagen originally called for all-electric Rallycross as early as 2016. After having gained popularity with both Manufacturers and Rallycross drivers since then, plans for a new EV headline category now have the okay from the FIA. 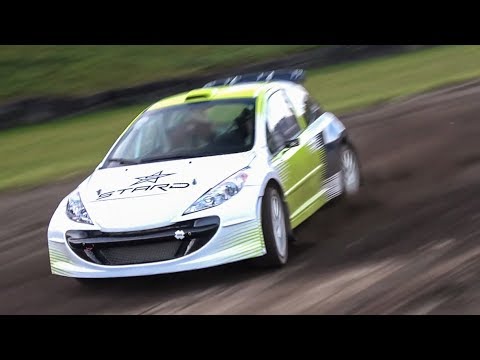 Powered by an electric motor on each axle, these new four-wheel-drive Rallycross cars will feature a total power output of 500kW – the equivalent to 670hp – and a 0-62mph sprint that easily rivals the current 2.5seconds. In order to keep the cost of competing down, all of the cars will benefit from a common drive battery from Williams and a common chassis from Oreca. Both companies have deals to supply the above from 2020 to 2023.

Wondering what that’ll look and sound like? Whilst we’re yet to see any official EV Rallycross cars from any manufacturers, the video to the left of Manfred Stohl’s privateer built ‘Stard Hiper’ will give you an idea of what the future holds.

Derived from the technical regulations that make up the framework of the popular Formula E electric Championship, it is said that performance differences between teams will come from the driver and the additional components that the manufacturer applies to their specific car.

Aside from the new technical regulations, the sporting regulations will remain the same as today’s World Rallycross.

Various manufacturers – such as Volkswagen, Audi and Peugeot – have already expressed their interest in this move to electrification and are assumedly already working on all-electric Rallycross technology. The FIA hope that this new official approval of the sport and regulations will help to attract further teams over the coming years.

Worded as a ‘new EV headline category’ by the FIA, there is currently no word on what will happen to the current version of the World Rallycross Championship. It is possible that a new EV category would run alongside Rallycross in its current form … but it’s also possible that we could see the new EV Rallycross take over entirely from the Rallycross that we know today.

Since the news was announced, this is certainly one that has divided opinion! We’d like to know what you think about the new electric series - let us know your thoughts on Facebook, Twitter and Linkedin.

BMW 530e iPerformance to Benefit from the Option of Wireless Charging.

Revised Clean Air Strategy proposal could come into force in 2030.