A very special 1964 Ferrari 330GT Nembo Spyder, that was previously owned by racing driver Richard Allen, was recently donated to the East Anglia Air Ambulance Service (EAAA). Set to go to auction in March of next year at the Imperial War Museum, this stunning Ferrari looks like it could raise an estimated £500,000 in aid of a new hangar that will enable the Air Ambulance team to save even more lives. 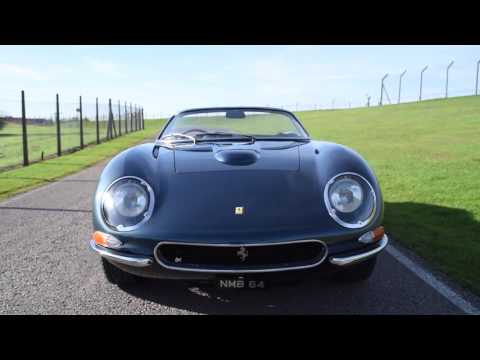 Richard, who sadly passed away earlier this year, was the Chairman of his family’s car dealer chain – Allen Ford. A keen motoring enthusiast, Richard raced Ford Anglias in the 1960s, Ferraris in the 80s and even went on to compete in the Ferrari Owners’ Club Racing Series in his Ferrari 328. A formidable hillclimber, it was as Ferrari Owners’ Club Chairman that Richard learnt of this Ferrari 330GT’s existence.

Originally conceived by ex-Maserati engineers Neri & Bonachini, the Nembo Spyder was the result of a project to create a GTO-inspired roadster. Whilst early examples were built upon Ferrari 250 GT chassis’, this fourth and final Nembo was based upon a 330GT. Commissioned by a British collector in the 1980s, the project was never completed and ceased due to a lack of funding.

After learning of this fourth Nembo Spyder, Richard purchased the car and had it shipped over to Britain so that he could complete any outstanding work. Once finished, the car included the same 300bhp 4.0-litre V12 engine that could be found in the Ferrari 330 and a shortened wheelbase. Featured at many Ferrari Owners’ Club concours events, Richard’s Ferrari 330GT Nembo Spyder was rarely driven.​

The car will be auctioned as part of an H&H Classics sale of historic cars, motorcycles and automobilia on 29th March 2017, with all proceeds being donated to the East Anglia Air Ambulance Service. Speaking of how this gracious gift will assist in the creation of their new hangar, Patrick Peal, the Chief Executive of EAAA, said:

“The gift opportunity which this legacy offers would enable us to proceed with the building of a bespoke hangar to house our helicopter, Anglia 2, at Cambridge airport some 400m from our base. Our own hangar next door would mean adding some 180 available shift hours a year, significantly increasing the number of lifesaving missions we could fly each year.”