Volkswagen Confirm a Production Variant of their I.D. Buzz Concept​

Unveiled at the beginning of 2017, the Volkswagen I.D. Buzz is a Microbus-inspired concept that harks back to the much loved Volkswagen Kombi. Excitingly, Volkswagen have now announced that it will go into production.

Claiming “Show Car of the Year” when it was unveiled at the Detroit Motorshow earlier this year, the I.D. Buzz is an all-electric Microbus that brings future technologies to a familiar and much celebrated aesthetic. Set to be an important part of Volkswagen’s future electric vehicle plans, the production version will hit our roads in 2022. 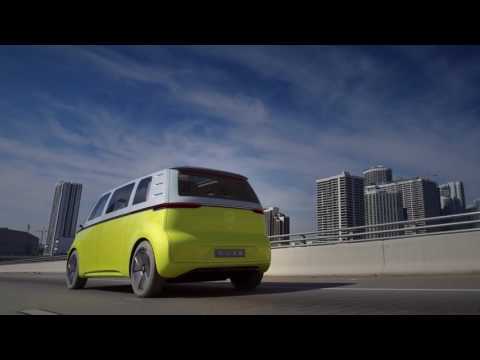 Boasting 369bhp fed to all-four wheels and a range of 373 miles, the I.D. Buzz concept was capable of fully autonomous driving through Volkswagen’s ‘I.D. Pilot’ mode – taking full advantage of this fact through front seats that could swivel 180 degrees to face passengers in the back of the vehicle. There was also an incredible augmented reality display and the capability to recognise the occupants’ smart phones to tailor the experience.

It goes without saying that a modern version of the VW Kombi that offered all of these capabilities took the year’s motor shows by storm – something that played a part in this new announcement. Talking of the I.D. Buzz Concept’ success, Volkswagen CEO Dr Herbert Diess said:

"After the presentations at the global motor shows in Detroit and Geneva, we received a large number of letters and emails from customers who said, 'please build this car’ … the vehicle is an important pillar in Volkswagen's electric drive initiative and carries the Microbus driving feeling into the future."

Much like the I.D. Buzz concept car, it has been announced that the production vehicle will feature fully electric drive with its batteries mounted in the floor of the vehicle. Due to the location of the batteries and the front and rear axles being mounted far apart from each other, the production version of this Microbus will boast both a long wheelbase and a larger amount of space inside the vehicle whilst still remaining compact from the exterior.

Whilst further details in terms of performance and exact specification are yet to be unveiled, Volkswagen have confirmed that the production vehicle will share many design ideas with the concept and will feature variable seating, interactive connectivity and a high level of automated driving.

For commercial customers and those who wish to transport cargo, a special cargo version will also be produced. Talking of this version, Volkswagen Commercial Vehicles CEO, Dr Eckhard Scholz, said:

"Along with a minibus version, we'll also be offering an I.D. BUZZ Cargo variant for zero-emission delivery operations in a Level 3 vehicle that boasts a high degree of automated driving capability … It's an ideal electric van concept, particularly for inner cities."

As mentioned previously, this production version of the I.D. Buzz Concept is an important part of Volkswagen’s Strategy 2025, which aims to have more than 30 all-electric models by that year. What are your thoughts on the Volkswagen I.D. Buzz? Let us know on Facebook, Twitter and Instagram.

T-Roc: An SUV with bold, striking design baked into every angle and line.