There's a New Fastest Production Car at the Nürburgring

It may only be five minutes since we last reported something like this, but a new Nürburgring record has one again been set. Unlike Timo Bernhard’s all-time fastest lap of the ‘Green Hell’ however; this new record sees the Lamborghini Aventador once again crowned the Ring’s fastest production car.  ​

More specifically, the record has been set by the yet-to-be unveiled Lamborghini Aventador SVJ (or SV Jota). Currently still wearing its camouflage, this incredibly exciting car is an evolution of Lamborghini’s extreme Aventador SV that benefits from recent developments in aerodynamics and some additional power. 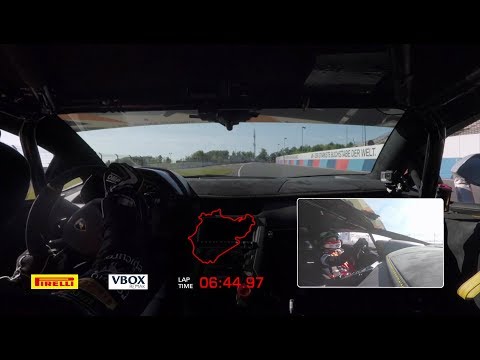 Completing its fast lap of the formidable Nürburgring in just 6m 44.97s, the Aventador SVJ managed to take 2.27 seconds off the previous lap record that was set by Porsche’s sensational GT2 RS.

The Aventador SVJ’s 15 second saving, when compared to the Aventador SV, comes courtesy of all-new active aerodynamics (ALA v2.0), a redesign that grants the car 40 per cent more downforce, four-wheel steering, track-focused retuned suspension and an additional 20hp from Lamborghini’s fantastic 6.5-litre V12.

The official unveiling of Lamborghini’s hardest ever Aventador will come at the end of August when the car is shown at Pebble Beach. We’re very excited to see how the final product looks and to bring you more information. Until then, what do you think of it so far? Let us know on Facebook, Instagram or Linkedin.

We spend some time with the legendary Lamborghini Aventador SV.

Join us as we take a look through the most extreme Lamborghinis of all-time.