Driven by BMW Driving Instructor Johan Schwartz, the new BMW M5 spent eight consecutive hours sliding sideways on a skid pad at the BMW Performance Center in Greer, South Carolina. The result was a drift that spanned a total of 232.5 miles and shattered the previous record by 143 miles. During the record attempt, Schwartz ate and drank whilst maintaining the slide to ensure that he was always fully fuelled … fuelling the car, however, was a more difficult issue. 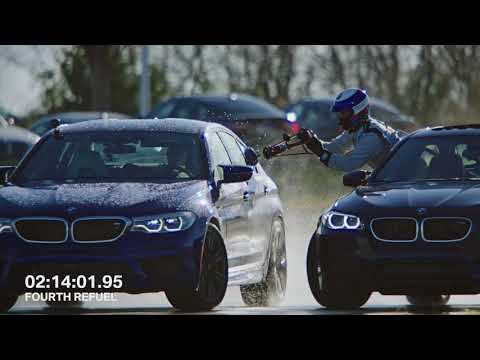 As you can imagine, a 232 mile drift that lasts eight hours requires the new M5’s mighty 4.4-litre V8 to be fed a fair amount of fuel. That problem forced BMW engineers to consider the question: how do you refuel a drifting car without ending the drift? Whilst previous iterations of the record had been set by cars with enhanced fuel tanks, BMW wanted to try something different that would allow them to continue the drift way beyond any previous attempt. Talking of the issue, Schwartz said:

“We knew going-in that if we were going to recapture the world record for longest sustained drift and set the bar as high as possible, we would need to find a way to keep the M5 going without stopping to refuel”

For their solution, BMW looked to the sky and drew inspiration from the daring in-air refuelling manoeuvres that are adopted by military aircraft; they decided to refuel the record-setting M5 through the use of a daring tandem drift refuel. As seen in the video, the manoeuvre is simply amazing and saw BMW Performance Center Chief Instructor Matt Mullins drift into a position that allowed Detroit Speed’s Matt Butt to attach a custom made refuelling nozzle.

If you haven’t already, we strongly recommend that you take a look at the fantastic video of this World Record attempt. We’d like to hear your thoughts on this incredible new World Record on Facebook, Twitter and Linkedin.

Sytner Group opens the largest BMW dealership in the UK.

Related News
The long awaited BMW i8 Roadster is here

BMW have given us our First Proper look at the BMW i8 Roadster.