Regardless of whether a car is a racing car or a people carrier, there are a number of things that are essential in order for it to function as a car – engine, wheels, seats, etc. Most of these elements have seen continuous development since the very first car rolled out on to the dusty track. After all, it seems only natural for things to change as technology progresses. One thing that hasn’t really changed however is the design of the wheel. Ignoring the age old saying “don’t reinvent the wheel” Goodyear have unveiled their all new spherical wheel concept.

Named ‘Eagle-360’ this new concept is a wheel that has been designed to offer future autonomous vehicles incredible manoeuvrability, safety and connectivity. Wearing 3D printed tyres, each wheel has the ability to move in an unlimited amount of directions and ultimately allows a car to turn 360 degrees on the spot, change lane or overtake without changing driving direction and even strafe from side-to-side. The ability to strafe becomes very important when you consider the possible parking constraints that are expected in the future; with Goodyear’s Eagle-360 concept, the capacity of every public parking area could be significantly increased without any need for expansion.

Each wheel consists of a core that forms the shape of the wheel, inside of which you find the powertrain (an electric drive motor), the battery and relevant sensors. The motor and battery are suspended in the centre of the core and are stabilised by a small gyro to ensure that they stay level. The centre remaining stationary, the exterior of the wheel is rotated by small wheels that are driven by the electric motor. The interior core is then wrapped in an all new Goodyear tyre that has been designed with inspiration that was taken from under the sea; brain coral to be exact. When asked about the concept, President of Goodyear EMEA Jean-Claude Kihn said:

“Though this is purely a concept tyre, it showcases some of Goodyear’s best innovative thinking and how the needs of future drivers can be addressed. Based on our recent research, we know that young drivers are looking for smart and sustainable cars to be part of future mobility and that reliability and safety are key for them. We believe the Eagle-360 concept tyre could deliver a safe and sustainable solution for our end consumer who is likely to drive or ride in autonomous cars in the future.”

Goodyear have stressed how Eagle-360 will make driving in the future safer. Active technology that has been deployed within the wheel would allow the tyre to move as much or little as required to reduce the chance of sliding due to potential hazards such as black ice or obstacles that suddenly appear.

Using clever sensors, programming and computer algorithms the Eagle-360 can also implement the use of different areas of tread depending on the conditions, this allows the car to maintain optimal grip regardless of surface.

There is also some clever technology in the tyre compound itself that assists with driving on wet roads. Besides being designed to mimic brain coral, the tyre utilises a special sponge like material that is hard when dry but reacts when it becomes wet to absorb and disperse surface water.

Whilst all of the technology used in the concept sounds rather amazing, it would seem that there is one fundamental flaw in creating a wheel that is effectively a ball – how do you connect it to the car? Goodyear have been very clever about this and have implemented ‘connection via magnetic levitation’.

It may sound like science fiction but magnetic levitation has already been implemented on certain trains to offer increased passenger comfort, reduced noise and better economy due to reduced friction. 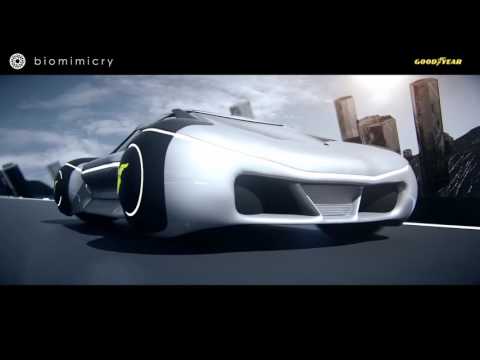 At current, Eagle-360 remains nothing more than a concept but it helps to once again demonstrate how exciting the future is going to be. Not only would autonomous cars benefit from the safety features that are inherent in the concept but they'd also have tyres that last longer and are more economical.