ŠKODA’s new compact SUV is called the Karoq. Its name and spelling draw on the language of the Alutiiq tribe – inhabitants of a southern Alaskan island whose native tongue was also the inspiration for Kodiaq. The names of the brand’s future SUVs will also follow this pattern. The Karoq will be unveiled in Stockholm on Thursday 18 May with its market launch following later in the year.

“The ŠKODA Karoq is a completely newly-designed SUV that sets new benchmarks for our brand and its segment in every way. With this new SUV, we are taking the next logical step in our SUV strategy,” said ŠKODA CEO Bernhard Maier. “The Karoq impresses with its unique brand identity and a distinctive product identity and is introducing – alongside the typical ŠKODA strengths – the brand’s new, emotive design language into the compact SUV segment,” added Maier.

The Karoq has already received excellent feedback. Top Gear magazine stated “ŠKODA’s new Karoq has the potential to set a new benchmark for the compact SUV segment” and Jonathan Burn in Auto Express said “Even from this early first taste, it’s difficult to pick fault with the Karoq’s range of abilities”.

The boot, which can be opened hands-free using the virtual pedal, has a capacity of 521 litres with the back seats in place. With the rear seats folded down, this volume increases to 1,630 litres. The optional VarioFlex rear seat configuration also means that the boot space can hold between 479 and 588 litres. The seats can be completely removed, effectively transforming the SUV into a van with a maximum loading capacity of 1,810 litres. Need to carry more? The Karoq can also tow a trailer weighing up to two tonnes. Featuring second generation modular infotainment technology (MIB II), Karoq offers state-of-the-art functions and interfaces, and is equipped with capacitive touch displays. 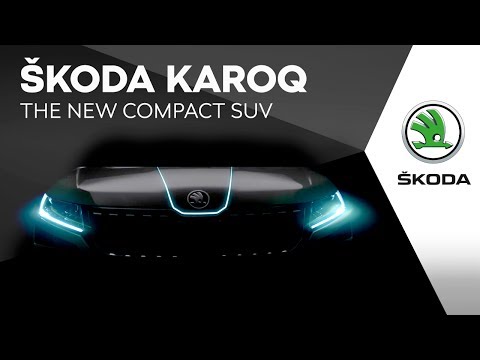