For many people across the world, the morning commute is something that certainly wouldn't be missed; many happily forgoing the stress of traffic and the ever looming threat of being late. In London alone, the population grows to 350,000 on a daily basis - as people aim to get to work in the ever-beating heart of the country.

In a bid to bring the era of the stressful commute to an end, the team at the DFKI Robotics Innovation Centre in Bremen, Germany, have created an innovative new mode of transport – the EO Smart Car.
At first glance the EO is an odd little creation to behold and, in parking mode, it somewhat resembles the walkers from War of the Worlds. Currently only designed for two people, the EO is not a mission in aesthetics, instead it presents us with a fairly remarkable window into the future of commuting and transport; utilising technology that is already incredibly accessible.

The lightweight vehicle is powered solely by electricity which is fed to each wheel independently. Independent power to each of the wheels is the first of the EO's clever little party tricks, liberating each of the wheels and allowing for more turn angle; in the case of the EO, this means that each can rotate by 90 degrees.
This is very handy when you consider that the sheer thought of parking during a city rush hour is something that could even make Stephen King quiver in his boots; with this feature engaged, however, parking becomes a thing of incomparable ease – the swivelling wheels allowing the car to replicate a crab-like sideways movement into a tight space.

To assist the occupant even further is the EO's ability to shrink at the touch of a button. To accomplish this feat, the EO lifts up over its rear axle to reduce the overall length from seven-and-a-half feet to just five-and-a-quarter. With city centre parking spaces being at a premium, this feature is imperative in the success of the future commuter vehicle and could, should a mass market be hit with cars like this, increase the number of spaces in a city ten-fold.

A small battery powers the EO to speeds of up to 40mph for a total of 30 to 44 miles and can be charged from empty to full in just four hours. Unlike many electric car companies, the onus when sourcing the power for the EO was not put on range and speed – it just isn't a necessity in a vehicle that would be used solely for commuting around busy cities.

The EO's short range also works on the notion that future cities will be laden with electric charging points or, better still; vehicles will be able to draw power from the roads themselves. Both of these are technologies or initiatives that are already being actively pursued.

DFKI are also using the quirky little EO to bring a new meaning to the term 'carpooling' and have created an innovative new way of car sharing – docking. Each EO features the capability to connect with other EO's, allowing for shared driving and energy saving; the docked EO's divert a reasonable amount of power to the EO in the chain that has the least charge until all participants are at an even level.
Once docked, the EO also takes on the form of an autonomous vehicle, allowing all members in the convoy to relax before work, catch up on outstanding emails or just communicate with each other freely through their EO's connection. 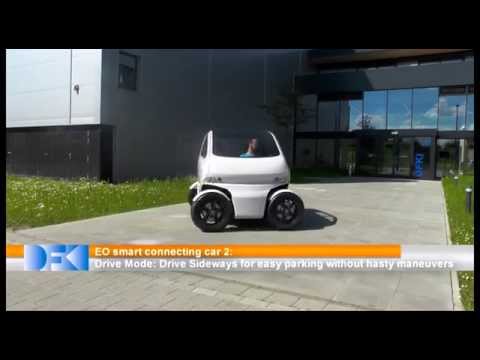 As you can see from the final concept car, the team at DFKI Robotics have given the innovative little EO more gadgets than Inspector Gadget has up his left sleeve - the resulting creation is truly inspiring.
Using a plethora of innovative technologies, that are already attainable, has allowed DFKI to create a concept that doesn't seem unrealistic or far-fetched and instead comes across as a viable look into the future. It'll be exciting to see what comes of the EO and how a creation like this will develop in the ever-changing and advancing world of automotive technology.