Ferry Porsche once said “function and beauty are inseparable; good looks alone don't win races", an ethos that can certainly be felt through the all new Porsche Cayman GT4. Building on the already intense Cayman platform, the GT4 features more downforce, traction and power than any other Cayman before it.

When you look at the new Cayman GT4 you can tell that it has been developed specifically to offer the greatest performance of any Cayman ever produced - in Porsche's own words this Cayman is “the hero of weekends; the rebel of the racetrack". The striking exterior styling has been influenced and developed through the way that air travels across the car - that large rear wing and small duck tail spoiler creating the same downforce as a 911 GT3, keeping the tail firmly planted at all times.

The engine, which proudly sits in the middle of the car, is a 3.8-litre flat-six offering the driver 380bhp and a 0-62mph time of just 4.4 seconds – half a second quicker than the Cayman GTS. Precisely feeding the power to the rear wheels is a painstakingly developed six-speed manual gearbox with specially tuned gear ratios; this stick-shift box not only gives the driver supreme control but also delivers an abundance of driver pleasure that wouldn't necessarily be felt through a paddleshift system.

A car like this should not only be fast and nimble but should also come with an abundance of drama and rebellion. The exterior of Porsche's new rebel certainly gets the ball rolling, but in order to further boost the drama of the Cayman GT4, Porsche have included a new selectable sports exhaust which, once engaged, lets loose a symphony of incredible flat-six thunder.

Hints of the Cayman GT4's relationship with the voracious 911 GT3 are evident. For starters: the car sits 30mm lower on 20in alloys and feature new sports tyres. Everything about the Cayman GT4 has been developed to create a car with insatiable sports handling; handling that is assisted by various innovative Porsche systems such as Porsche Torque Vectoring and Porsche Stability Management. 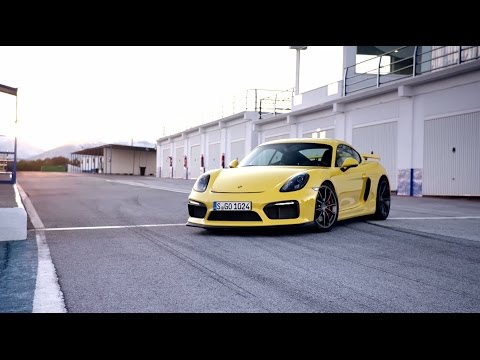