Our brand new A-class hatchback, the ŠKODA SCALA, made its international debut in Tel Aviv, Israel on 6 December.

SCALA will be launched in the UK in the middle of 2019, and shows the Brand’s new emotive design language. It’ll be the first model to have ‘ŠKODA’ written across the centre of the tailgate, replacing the traditional roundel, and features the new MIB 3 infotainment unit, positioned high up in the driver’s line of sight.

The SCALA has full-LED headlights and taillights, plenty of space for luggage and passengers, plus numerous Simply Clever features.

The four-cylinder 1.6 TDI 115PS efficient diesel engine is coupled with a six-speed manual gearbox as standard; a seven-speed DSG is available as an option.

Despite its compact dimensions, the Scala has a generous amount of interior space. The new model measures 4,362mm in length, is 1,793mm wide, and 1,471mm high – and the long wheelbase, at 2,649mm, gives the car top-notch driving characteristics.

The SCALA has one of the largest boots in its segment with a capacity of 467 litres, increasing to 1,410 litres with the rear seats folded down.

The optional and fully configurable Virtual Cockpit is available with a 10.25-inch display: the largest in the compact car segment. The infotainment system displays measure up to 9.2 inches – also top in the class.

A new generation of ŠKODA Connect mobile online services gives passengers the option of locking and unlocking the car using a mobile phone, and updating the software of the infotainment or maps ‘over the air’ – without the need to visit a retailer.

The SCALA features optional Side Assist that indicates to the driver when a vehicle is approaching from behind to overtake, or is in the driver’s blind spot. It can detect vehicles up to 70 metres away.

*The full UK specification is yet to be confirmed. 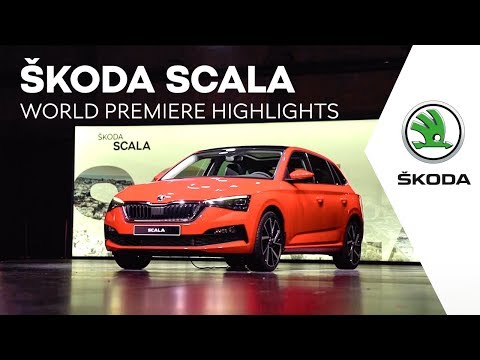