This is ŠKODA’s 15th year as the general sponsor of the Tour de France, the legendary annual cycling race.

Besides laying on a large fleet of cars, ŠKODA also designs the winners’ trophies. This year, the designers have teamed up with Bohemian glassmakers to produce 60 cm tall trophies weighing in at 4 kg for the champions of the 105th Tour de France. In the 2018 event, the racers have to surmount 3,351 extremely tough kilometres over 21 stages.​

Each stage of the Tour de France is headed up by a 12-kilometre caravan of race partners, all with one goal: to create excitement and emotion amongst the audience with millions of presents and a great show.

The entire caravan consists of 160 to 170 vehicles lining up to promote the various commercial partners of the world’s most famous cycling race. This huge caravan can stretch to up to 12 kilometres in length and runs through a stage at roughly the same speed as the cyclists, with it having the ability to easily be on the track for more than four hours. You could say it's a circus on wheels.

The goal is to grab spectators’ attention, meaning the caravans all have something special. For example, enormous figures of cyclists in the ŠKODA livery, gigantic versions of the green jersey for the best sprinter, stuffed lions, giant plastic oranges, cakes looking like flying saucers on wheels, deep fryers stuffed with chips, chickens, and even mobile homes.

The preparations and the actual caravan ride involve roughly 600 people, all of whom start preparing for each stage almost two hours before the scheduled start time. In a large car park near the start of each stage, all the crews work out the finishing touches, load up thousands of presents, test the sound systems and fine-tune the choreography of their MCs and dancers.

At the start of each stage, the caravan is divided into smaller groups based on the brands being promoted. These teams keep their distance from one other so that the spectators can properly focus on each show as it comes by.

The main star of the ŠKODA part of the caravan is a completely rebuilt truck with a fully open top and a massive green jersey for the winner of the Tour’s sprinter classification. The crew consists of a driver and an MC, whose job is to get the crowds of fans excited along each stage. In the back seats, invited VIP guests get to enjoy a truly unusual ride. The whole group is accompanied by a hostess, who tries to give out as many gifts as possible along the way, handing out thousands of green jerseys and cycling caps.

Besides the float, five KODIAQ and KAROQ cars plough along the stages of the Tour de France, carrying on their roofs laughing figures of cyclists made famous by the website WeLoveCycling.com. The rear sections of all five accompanying SUVs are heavily modified so that another team member can pass out gifts to those lining the route. Every day, the team gives out more than 30,000 caps and jerseys to spectators, distributing over 600,000 gifts to fans throughout the entire Tour. Over the three weeks of the Tour de France, the entire caravan hands out an unbelievable 14 million gifts.

Riding in the caravan is a fantastic experience, especially in an open truck. You can see the route of the stage in front of you, you feel the energy of the spectators on both sides of the road, and you imagine what it must be like to be in the peloton at full racing speed. The biggest rush, though, is undoubtedly the interaction with the fans along the route. People applauding, waving, and in the few seconds it takes to pass them there might even be a quick dance with the MC standing beside the truck driver.​

you can see kids and adults with happy eyes putting on the caps and green jerseys that they just got from the hostess in the car in front of you.​

The idea behind creating the caravan was born 88 years ago by the founder of the Tour de France, Henri Desgrange himself, who wanted the racing teams to represent their countries, not commercial brands. All the partners of Tour de France then gathered into a long caravan moving along the same route ahead of the peloton. The idea of national teams didn’t catch on right away, but the caravan was an immediate hit among the fans. For the more than 80 years of its existence, it has become a phenomenon that’s just as much a part of the Tour de France as the cyclists are. The same applies to ŠKODA, which has been a race sponsor since 2004.​

ŠKODA, as an official partner, will supply 250 cars for the race. In addition to ŠKODA OCTAVIAs, the fleet also includes the SUVs ŠKODA KAROQ and KODIAQ and the ŠKODA SUPERB sedan. A ŠKODA service team will prep all the cars so that they are in perfect condition before each stage. ​ 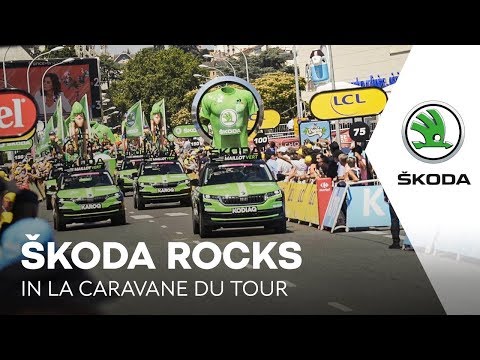